Skip to content
Wyoming, Michigan
Today we observed Scout Sunday at Holy Trinity Episcopal Church. During the service, Deacon Brad Allard asked Assistant Scout Master Owen Smith, two Boy Scouts, and a Cub Scout of Troop 250 to the altar. Troop 250 of Byron Center, Michigan was represented by Magnus Smith, Nolan Smith, and Grayson Smith.
The Boy Scouts of America annually celebrates its founding on February 8, 1910, based on the program started by Lord Baden Powell in England on August 1, 1907. Scout Sunday was added to the Scout celebration in the middle 1940s. Scout Sunday is always the Sunday preceding February 8, unless February 8 is a Sunday. Then February 8  would be Scout Sunday. 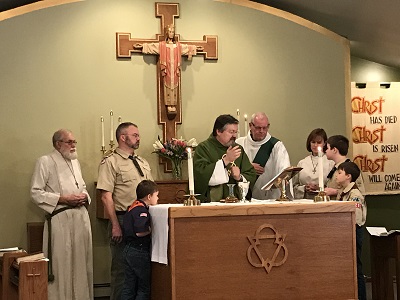 The Scout Sunday tradition was started to make people in houses of worship aware of Scouting and to allow Scouts to live out their “Duty to God” pledged each week. The Scout Law says that a “Scout is Reverent” and that Scouts of all ages promise to do their “Duty to God”. These values strengthen youth character in their family, community and faith.

Office hours
Cancelled at this time.

The Episcopal Church welcomes you!